Clarence sometimes called his wife Doll, though her name was Dolly. Dolly’s parents did likewise her being doll sized, when she arrived two months ahead of schedule and before they bought her crib.

“Did you really sleep in a shoe box when you were a baby?” Alfred would ask his mother.

Always answering the same, making “L’s” of her pointers and thumbs, drawing an imaginary box like the one she described as her cradle. With eyes big, her still fiery red haired son would always say, “Wow,” adding, “You were tiny,” stretching out the long “e” sound of the y in “tiny,” until out of breath. Then he would throw his arms around his mother’s waist pressing his face against the softness beneath her apron which always like her smelled of love.

Today, though Alfred lay busy stretched out in the living room floor with Peter Hargett putting together a paper puzzle her husband cut for them from an old newspaper they brought to him along with a pair of scissors. Alfred had only come to the kitchen once that morning and that was to ask his mother when the food would be ready. Something his little friend put him up to.

The house was quiet, empty of boys, busy outside stacking firewood and girls, shut away in their bedroom. Listening to their record player, the Turnberry girls were were busy shelling pecans they gathered from under the tree behind the house. With her children leaving her alone in the kitchen, no questions would be asked about the strange, funny way she went about preparing this year’s Thanksgiving dinner.

Unsure of how she would ever stretch the skinny Cornish hens so there would be enough to share, Dolly left them thawing in the kitchen sink while she searched through the spoon drawer for a cookie cutter. It was smaller than the one she normally used to cut out biscuits and when she slipped the baking tray in the oven twenty four biscuits smiled up at her instead of the usual twelve. This trick she learned from her mother who also taught her to add water to the gravy when milk became scarce.

Then rather than filling family sized casserole dishes with recipes like her Turnberry surprise, delicious cream of mushroom soup, broccoli, spinach and cheese all covered with bread crumbs she used smaller dishes; one for her table and one for the Hargetts. She did the same with the pudding she made and adding in a few marshmallows to fluff it up a bit. With extra cans of beans and corn in the cupboard to open, she returned to the two chickens which looked small and lonely. Chicken pot pie to the rescue she decided with a smile. Chicken pot pie a favorite of her family would do nicely especially since flour remained from the biscuits for rolling out all the pastry she needed.

Taking the tiniest bite of the casserole as it would not last too long when her children started digging into the plates and platters and dishes of food spread across the table, she smiled satisfied. She wouldn’t be alone nibbling at only spoon-sized portions of food while her children enjoyed the meal she prepared. Clarence eating only morsels of what she cooked and drinking extra glasses of water would keep her company. This made her sad. Her dear husband looked too poorly of late and seeing him go without enough to eat stirred a pain inside of her for the over-sized heart which beat beneath his thinning shirts no longer hiding his skinny bones. Clarence a good man, too good, never let her know his feelings, sadness or the reasons for his down-turned smile.

Thanksgiving dinner this year would be meager for the Turnberrys and the Hargetts. What Dolly boxed up and what remained on her own table, only offered enough for a taste of Thanksgiving when shared among so many. Still thankful, she remembered the shoe box cradle her parents laid her in as a newborn.

Dinner was not the first or only thing she sent to the family living in the old Pennyweighter place. As the early window rattling November gusts grew brave and began to blow hard, one of the Hargett girls showed up on the Turnberry porch shivering in a paper thin sweater even after she came inside.

The Hargett children each took turns staying home from school to sit with their mother while their father worked in the factory. With her mother needing medicine, desperate, the girl knocked at the Turnberry door. Dolly, seeing her in, out of the blazing cold, gave the poor girl what remained of her family’s cough syrup, a few spoonfuls left over from the previous year’s cold season. So far this winter the Turnberry’s house had been spared any of the usual colds going around. Shy and embarrassed, the girl thanked Dolly before disappearing toward home and her sick mother.

The following day with her children off to school and her morning work done, Dolly fished out the ingredients for a lemon pound cake which she made for her neighbors. She left the cake on the back porch of their house where it was discovered still being enjoyed by the Hargetts, when Peter came over carrying a piece of the mysterious treat for Alfred after school that evening.

The two little boys shared the skinny slice of cake, careful not to let a single crumb of slip away, washing down their portions with a swallow of milk Dolly poured for them in Alfred’s favorite mug.

“Tastes like my mama’s cakes,” Alfred said to his hungry friend. Dolly smiled.

With Thanksgiving dinner delivered to the Hargetts, which he insisted they accept, Clarence returned to his family and Peter Hargett too, seated around the kitchen table. With no place to sit, Dolly stood as always. Alfred said grace and a prayer for Peter’s mother, during which no one saw the little neighbor boy slip two biscuits from the platter and shove them into his coat pocket for later.

Watching his children and Peter,  faces full of contentment, Clarence only ate a spoonful of what lay before him on the supper table. In bed, that night when no one could hear their conversation, he told Dolly what a wonderful meal she cooked and that he thought the chicken pot pie was her best ever. Then his voice trailed off and she sensed his thoughts drifting as her hand slipped into his.

“You hardly ate more than a mouthful of any of thing,” she said hoping that he would open up to her and share what troubled him, but he wouldn’t.

“You didn’t eat much either,” he whispered back through the darkness. She squeezed his hand. Then she listened to the girls talking in the next room and waited for the boys to join in the conversation as they always did.

The six oldest Turnberry children shared a room. Factory houses, cheaply built typically came with only one bedroom. Fortunately for the Turnberrys some previous occupant of their house had moved some walls creating another.

Clarence wanting to give the children privacy, divided their narrow little room almost in half stringing a curtain between its two beds, beds which climbing into called for a trip across their foot boards.

In winter months this arrangement worked as well as could be expected. Summers though always brought trouble and mainly because the girls’ side had the window. Unless a breeze stirred the old factory house despite its high ceiling and tall windows, tended to be as miserably hot in summer months as it was miserably cold in winter.

To keep peace, the boys relinquished the bed they shared to their sisters and slept on quilt pallets in the living room. Alfred who spent his nights on a cot at the foot of his mother and father’s bed, would join them gathering up a pillow and bed sheet and finding himself a place on the rope rug, wanting to be like his big brothers.

“Are we poor?” one of the girls asked. The oldest boy informed her that they were poor but not dirt poor; not like the Hargetts. Other voices shared in the talk with a fair amount of back and forth between them as well as some quiet. Then the topic of the children’s conversation changed as they began speculating on what Alfred would choose as his Christmas present from Mr. Pennyweighter. After a healthy debate in hushed whispers, they all finally agreed that their little brother now fast asleep would bring home a bicycle.

“I don’t know why, he’s not able to ride one,” Thomas said as Dolly felt the hand holding hers tighten. Although Thomas didn’t intend what he said in a mean way, it still hurt Clarence.

“Mind what you say,” the children’s father said across the darkness. A painful tremor echoing in his voice as it was carried between the rooms and was returned with silence.

In the quiet, as the house settled, Dolly found herself overcome with feelings only a mother can know. Her children were all close around her, safe and warm and falling asleep with smiles on their faces and all part of a big family with love being the only thing of which there was ever enough.

Her eyes closed as she put her thankfulness into words saying a prayer for the gift of her husband and her children. She said a prayer for the Hargetts too. Then Dolly listened for the soft sighs of Clarence before she let herself be overtaken by sleep. The day had been long.

This is a Chapter from A Prayer for Christmas which I pray blesses your heart to read as much as it blessed my heart to write. I would be so honored if you read this little book and learn more about the Turnberrys, Hargetts, Mr. Pennyweighter, and the power of love, forgiveness, faith, and prayer.  Hope you enjoy and Happy Thanksgiving and  Merry Christmas. 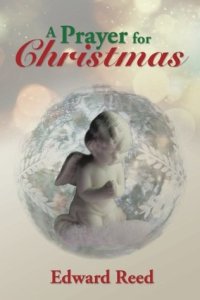