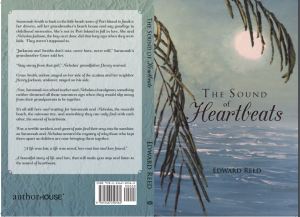 The Sound of Heartbeats
Edward Reed

The next morning, Savannah went for a swim in the ocean and it felt wonderful, warm ocean water and the sun just beginning to peek over the horizon. With the house already warm when she woke, she slipped into a swim suit and headed for the beach on the end of the island, by the pier. There were people there. The stretch of beach behind her grandmother’s house could be lonely. Today, Savannah wanted people, and she wanted to be close to the waves and sunshine she remembered.

It was a beautiful day that lasted forever, the sun taking its time to cross the sky. Sandcastles and umbrellas and the smell of sunscreen and sea air stirred Savannah, as she watched, and remembered. Then, as sunset hinted its arrival, Savannah gathered her things and in the warm breeze made her way to the car. Thinking about supper, she wondered what she might find at the island’s little grocery store.

The store looked just as she remembered with its electric doors that swung open like always. The shopping carts were in the same place too, only older and more stubborn.
Just another tourist, Savannah got the usual greeting from the lady behind the cash register. Shopping carts to the right, bread rack to the left, Savannah knew her way around. The place seemed smaller though, as she pushed back her sun glasses. This shouldn’t take long, Savannah told herself before beginning to make her way up and down each aisle.

Just as she was beginning to make her way up the frozen food aisle, a voice reached out and grabbed her.

Soft and low, the voice behind her sounded vaguely familiar. Caught off guard and standing still, like she learned to do in self-defense class, her mind raced to remember. Then she smiled, eyes closed and her heart beating fast.

“I don’t want you messing around with that Nicholas Jackson,” the voice whispered again, this time closer to Savannah’s ear.

“Do you understand what I’m saying, young lady?”

The voice behind her, now sounding grandmotherly, made Savannah’s smile grow. She didn’t want it to stop.

“Cute or not, you stay away from him. Jacksons and Smiths don’t mix; never have and never will.”

“But Grandma, Nicholas loves me.”

“Those Jacksons will tell you anything, and he’s a kid. What does he know about love?”

“Grandma, Nicholas says he wants to marry me, so we can make a house full of Jackson Smith babies and make you a great-grandma.”

“Talk like that, young lady, and you’ll be on the next bus for home,” the voice said, slipping into the lower warm baritone.

“Does this mean I can’t meet him tonight under the mimosa tree like we used to before you found out about us sparkin’?” Savannah pleaded.

Savannah opened her eyes not wanting this little charade to end. But it would. A very pregnant mother was pushing a shopping cart her way with a child following. Soon, Savannah would have to share the aisle.

Eyes closed again, Savannah remembered herself back dozens of summers.

“Not at eight o’clock tonight, when everyone’s asleep?” Savannah wondered out loud, now playing along.

“No,” the voice answered. This surprised Savannah, making her heart drop.

The pregnant mother with the shopping cart and child, now closer, watched as this little drama unfolded between the frozen peas and fish sticks.

“How about nine?” the warm southern voice behind her asked, the smile returning to Savannah’s face. She turned around already knowing to whom the voice belonged, somehow expecting him to still be the skinny, freckle-faced, twelve-year-old she remembered. He wasn’t; and here she stood fresh off the beach, wearing a cover up, flip-flops, and no makeup. Not knowing exactly what to do, she hugged him. He hugged her in return, a friendly hug.

He was in a hurry and she was glad, feeling frizzy haired and under dressed. Had she shaved her legs this morning? She couldn’t remember. Wearing sunglasses, a baseball cap, and with a tape measure clipped on his belt, he looked like a construction worker. Not the Nicholas Jackson she remembered.

“Yes. See you then,” he said welcoming her back to the neighborhood before vanishing up the aisle.

Savannah, heart fluttering from her little encounter, continued making her way past the frozen food, taking her time. The mother and child pushed past her, disappearing too.

“I don’t want you messing around with that Nicholas Jackson,” she said to herself, smiling as she continued searching the frozen dinners.
Port Island Grocery, like the rest of the island, didn’t like change. It carried the same small selection on the same few shelves she remembered from shopping there with her grandmother.

At least the produce is fresh, Savannah decided, picking out tomatoes, lettuce, mushrooms, peppers, and onions. She needed something healthy to go along with the Slim Lady frozen dinners in her shopping cart.

The bag boy was fresh too, asking her where she was from and about her perfume.

“Perspiration,” she told him making it sound a little French. He looked confused.
Tired after a day of sun and waves, and carried away by her run in with Nicholas Jackson, she headed home. The big ball of fire in the sky was falling fast, and she had a date.